Research by a native of Uttarakhand has shown that spiritual and non-spiritual tongue-twister practice enhances the cognitive functioning in relation to altitude. For her PhD thesis from AIPS, Amity University, Noida, Deepika Chamoli Shahi undertook research on the effects of using the Orange Manjushree Mantra.

Elaborating on the Orange Manjushree mantra, Shahi states that Saraswati has been worshipped as the goddess of wisdom in various Asian philosophies. In Buddhism, the name of male form of Saraswati is Manjushree or Vakeshwar.  According to Abhidharma Pitak and Manjughosha and many other scriptures “Om Ara Pa Cha Na Dhii” is considered the magic syllabary. It is known as a tongue exercise and used to purify tongue by continuous repetition for 15 minutes daily. It is the routine in Buddhist monasteries that when a monk is admitted, the first type of chanting used by him is Manjushree mantra chanting. The old Buddhist scriptures have mentioned the importance of orange Manjushree in enhancing the various mental functions.

In Dehradun the students showed more improvement in all the other mental functions except reaction time and elaboration in creativity as compared to children in Delhi-NCR. The children from Delhi-NCR are less focussed although they have plenty of information around.

Based on the research, Shahi avers that Manjushree mantra is a high-level tongue twister which can enhance the mental functions through 15 minutes of practice for 30 days as compared to any other tongue twister. 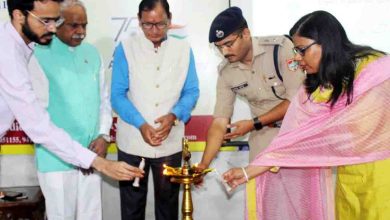