Facebook Twitter LinkedIn Pinterest Reddit
“Science is also a religion. It also depends on belief,” a friend who holds a doctorate in physics said once provocatively. He has a point. The scientists believe in theories that seem to explain what they observe. Yet they don’t know for sure whether they are true. For example, mainstream scientists still hold that consciousness is a kind of by-product of the brain. They may have to revise this theory ultimately. Maybe one could say that science is in between Christianity and Islam on one side and Sanatana Dharma on the other. It is not rigid as the dogmatic religions are, because it is open to change if new insights emerge. But it is lacking the most important knowledge – the knowledge of That which alone is true. Scientists have discovered the oneness of all, but for them the oneness is dead, without life. The rishis have discovered the oneness many thousand years earlier, but for them this oneness is alive and knows itself. So far the rishis have never been proven wrong in areas which were tested, like the age of the universe or even the distance between the sun and the earth. Would it not make sense for modern scientists to take their claim seriously that the underlying all-pervading, pure consciousness – satchitananda – is the eternal truth, and names and forms are more like virtual reality. The truth is not something abstract, cold, and theoretical. It is the conscious, loving essence in all. It follows that everything is sacred, everything is permeated by satchitananda. So is it really so incomprehensible when Hindus worship rivers, trees, the sun or the cow who gives so much to human beings and herself is so peaceful with the most beautiful eyes? Is it not arrogance and hypocrisy on the part of western scientists, when they rush to debunk as superstitious unexplained happenings, which Hindus consider as wondrous, yet keep mum when miracles are ascribed to Christian ‘saints’ like to Mother Teresa recently? Are Hindus not far more on target when they see Divinity in all? Is it not true? Is it ‘more true’ to see the sun only as a ball of helium? Or water only as H2O? The Aerospace Institute in Stuttgart conducted research which indicated that water has memory. Does it not mean it is alive? Or take the cow: Now scientists discovered that the indigenous Indian cows give better milk than for example Jersey cows. Traces of gold were confirmed in the milk of Indian cows which is useful in Ayurveda. Swami Ramdev is setting up special cow research institutes, to confirm the long held Indian beliefs about the usefulness of even the cow urine for example. How long will western scientists mock Indians worshipping the cow or using her urine as medicine? Great scientists like Einstein did not demean spiritual practices but were aware of the huge amount of knowledge that they are NOT aware of. Lesser scientists quickly ridicule what is unfamiliar to them. Or are these scientists caught in their fixed Christian belief system and cannot think beyond it? According to Indian texts, we live presently in a dark era, the Kali Yuga, where people are materialistic and their mind power is weak. They wrongly think that they are only body and mind. Many thousand years earlier, in the Satya Yuga, Treta Yug and Dwarpara Yug, human beings had a better connection to the spiritual dimension of their own being. For them “Aham Brahmasmi” was more real than it is for us today. Yet the realisation of true knowledge won’t come by thinking. It comes by sinking into the vast intelligence from where thoughts emerge. Intuition springs from there. And somebody who can tap this intelligence naturally can bring superior knowledge into his mind and express it. When the mind is stilled by dropping thoughts, the divine dimension of one’s being shines forth. True inspiration and intuition come from this level, and true happiness as well. It is this, our true nature, which we are all seeking in our pursuit of happiness. We won’t find lasting happiness among the names and forms. And how to drop thoughts? In the Vijnanabhairava, one of the texts of Kashmir Shaivism, 112 methods are described. Maybe they are already patented in the west and come to India in the form of seminars held by foreigners charging hefty fees? The participants from the English speaking Indian elite would not notice, as they still, like under British rule, don’t learn anything about their tradition, not even about their ancient history. The Chandogya Upanishad describes how the sage Uddalaka prodded his son Svetaketu to know “That by knowing which everything is known” and how he helped him along with valuable questions and metaphors. Today, scientists like Hawking, also search for ‘That by knowing which everything is known’ but they still have a blind spot. They don’t search where it is to be found: Within their own consciousness. And no, I don’t dream anymore that the anchor in a news broadcast announces that scientists discovered proof that God exists. I realised that scientific proofs are valid only within assumptions that have been proven already not to be absolutely true. The apple falls down, ok, but ultimately there is no apple… “I am” alone is self-evident. It is the truth that needs not to be proven. This truth is our greatest treasure. It is supreme, blissful Intelligence. It is within all of us. In English one could call it ‘God’. (The writer is a German psychologist and author who writes in German and English. Her book ‘Thank you India’ has recently been published. Views expressed are personal.) Friday, 15 February 2019  | Maria Wirth | in Devbhoomi Spiritual 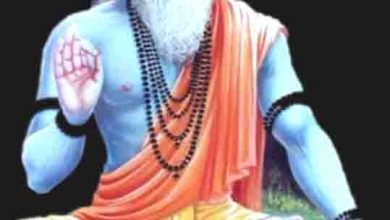