Facebook Twitter LinkedIn Pinterest Reddit
Andhra Pradesh Chief Minister Chandrababu Naidu called on his Bengal counterpart Mamata Banerjee on Monday as part of his effort to bring the Opposition parties on one platform to topple the BJP in the next year’s Lok Sabha polls. After the meeting, Mamata said everyone would be the face of a “mahagathbandhan” and they would fight together against the BJP to save the nation. Naidu said the proposed November 22 meeting of anti-BJP parties in Delhi had been postponed and it will now be held sometime before the Winter Session of Parliament beginning December 11. “We wanted to meet on November 22 (but) because of elections we want to make it before Parliament (Winter) Session,” said Naidu, adding those who were opposing the BJP will join and discuss (the future plans). “We will chalk out a programme to move forward and take this momentum further on the agenda to protect the nation,” he said. Incidentally, Mamata had been among the earliest leaders to call for an Opposition unity through Federal Front against the BJP in which she floated the “one against one” theory according to which she said, “the parties that are strong in a particular place should fight the BJP and the remaining parties should support them.” Talking to the reporters after the meeting, the TDP chief said the BJP Government had crossed all the limits of “intolerance towards the Opposition parties and the minorities” and was using the Central agencies like CBI, ED and Income Tax Department to harass and malign them. In fact these premier institutions, including the Reserve Bank of India and CAG, were under “severe pressure” from the Government to serve its interests, he said. The two leaders, who met in Kolkata for about an hour and a half, said majority anti-BJP parties have expressed their opinions to unite for the single-most important cause of ousting the BJP from power. Both leaders are in touch with their Opposition parties’ counterpart like Congress president Rahul Gandhi, former Prime Minister HD Deve Gowda, his son and Karnataka Chief Minister HD Kumaraswamy, NCP chief Sharad Pawar, National Conference’s Farooq Abdullah, DMK chief MK Stalin and others. Meanwhile, the Bengal BJP on Monday staged road blockades in Kolkata and district headquarters protesting alleged attacks on State BJP president Dilip Ghosh and senior leader Joy Banerjee. The two leaders were attacked allegedly by Trinamool workers in Hooghly district while they were returning from a meeting. Blockades were staged at Midnapore, various places in Kolkata, Hooghly, Asansol and elsewhere, sources said. read more posts… Tuesday, 20 November 2018 | Saugar Sengupta | Kolkata—
Tags
BJP Chief Minister Congress India

Expert panel to look into capital surplus issues: RBI Board 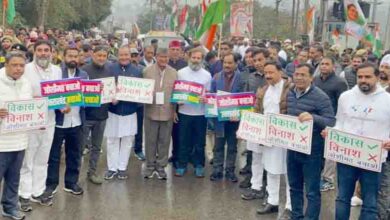