Uttarakhand chief minister Pushkar Singh Dhami while presenting the case of the State in the meeting of the Kishau Dam multipurpose project on Wednesday has said that the cost of the power component of the ambitious project should either be kept unchanged in the case of increase in the total project cost in the revised DPR or the increased power component of the project should be distributed equally by all the six beneficiary states so that the consumers of the state get cheap power. The meeting held in New Delhi was chaired by the union Jal Shakti minister Gajendra Singh Shekhawat.

The projects would provide irrigation water to Uttar Pradesh, Haryana and Rajasthan and supply drinking water to Delhi. Uttarakhand and Himachal Pradesh would equally divide the power generated by the project and as per the MoU Uttarakhand and HP would share the power component cost of the mega project.

He said that the national project would prove to be a milestone in the development of Uttarakhand and it would provide direct and indirect employment to the people of the state and it would provide an opportunity to increase the income of the local people. The Uttarakhand CM said that beneficial schemes would be developed from time to time with the help of local public representatives for the development of the area and public welfare.

In the meeting the chief minister of HP Jairam Thakur and Haryana CM Manohar Lal Khattar participated virtually. The HP CM also supported the stand taken by the Uttarakhand CM on the issue.

The Union minister Shekhawat said that soon a meeting would be convened to discuss the issue.

It is worth mentioning here that the implementation of the project is being done by Kishau Corporation limited which is jointly owned by HP and Uttarakhand. This project was declared the ‘national project’ in the year 2008. Proposed on the Tons River in Dehradun district of Uttarakhand and Sirmaur district of HP the project when completed would be the second biggest dam project in Asia. Under the plan 236 meter high and 680 meter long dam would be constructed on the Tons River and when complete the project would maintain the water availability in the Yamuna River. The dam would have a reservoir of 1324 MCAM capacity and help in irrigation of 97,076 hectares of land. It would generate 660 MW of the power which would be distributed equally among HP and Uttarakhand.

The secretaries R Meenakshi Sundaram, H C Semwal and officers of the Jalshakti ministry were present on the occasion. 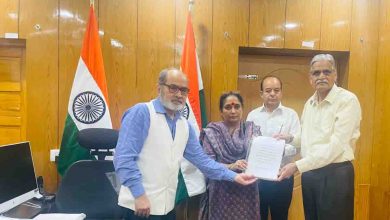