The Uttarakhand High Court (HC) has directed the Union Government, the State Government and National Institute of Technology (NIT) to file replies in two weeks on shifting of the NIT Srinagar campus. The bench of the HC comprising the chief justice Ramesh Ranganathan and Justice Lokpal Singh delivered the order on Monday while accepting the application of the villagers of Sumadi and Niyal to allow the court to be a party in the case. In their application, the villagers said that a land of 120 hectare had been donated by them to house NIT Srinagar in the hope that it would usher in development of the area and check migration. The State Government had provided a sum of Rs 9 crore to the forest department in lieu of transfer of land in the year 2009 while a sum of Rs 4 crore had been spent by the Government on constructing a boundary on the land. In their application before the court, the villagers said that a geological survey had also been conducted by IIT Roorkee of the land earmarked for the institute but a report was awaited. The villagers also told the court that the institute is now being shifted to a place located in the plain area. The court has been hearing a petition of a former student of the institute Jasbir Singh who said that a permanent campus was still eluding the institute even after nine years of its establishment. He said that the students have been demanding a permanent campus for many years but their demand is being ignored by the Government. The petitioner added that the building from which the NIT is presently operating has become dilapidated prone to disaster. He said that the one girl student of the institute had lost her life while another was very critical as they met with an accident while crossing the road on way to the institute. Taking a stern view of the failure of the Union and State Governments as well as NIT to file a reply on the serious matter, the bench ordered that they should do so within two weeks. It is worth mentioning here that on demand of shifting the institute, the students took the extreme step of leaving the institute en masse on October 22. Heeding to the demands of the students, the Union Human Resource Development Ministry ( HRD) set up a transit campus for the students at NIT Jaipur. The decision of the HRD Ministry is being viewed a setback to the State as both the Chief Minister Trivendra Singh Rawat and the Minister of State for Higher Education  Dhan Singh Rawat have been consistently affirming that the premier institute would not be allowed to be shifted out of the hills of the State. Set up in the year 2010 in Srinagar Garhwal, NIT has been functioning from a temporary campus. The administrative block and the labs are housed in the old ITI campus while the students have to go to the Poly-technique College campus for classes. Read more posts… Tuesday, 11 December 2018 | PNS | Dehradun–
Tags
goverment High court uttarakhand Uttarakhand news

Performance of Ministers in House up to the mark: Munna Singh 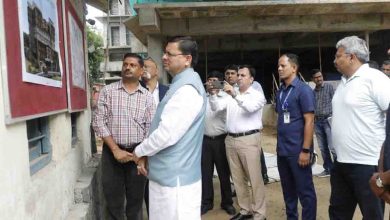