Friday, 16 November 2018 | PNS | Nainital– The High Court of Uttarakhand has directed that the bail application of news channel CEO Umesh Sharma be heard by the lower court in Dehradun on Friday. Further, the division bench of the high court also directed that notices be issued to the brother of the Chief Minister, an acquaintance of the CM- Sanjay Gupta and the investigation officer in the case.

After hearing on a petition seeking quashing of the FIR against Sharma, stay on narco test and brain mapping of the accused, the high court division bench comprising chief justice Ramesh Ranganathan and justice Alok Singh directed that Sharma’s bail application should be taken up for hearing by the lower court in Dehradun on Friday. During the hearing, the state government withdrew its application seeking permission for narco test and brain mapping of Sharma till the case is in the high court. The order of the high court on Thursday is being seen as a jolt to the state government. Earlier, the court had ordered stay on the arrest of four other accused persons in this case. It is pertinent to mention here that Sharma had been arrested during a joint operation of the Uttarakhand and Uttar Pradesh police from his residence in Ghaziabad, Uttar Pradesh earlier in October. The police had also recovered cash, foreign currency and equipment used in sting operations in addition to a number of CDs, hard disks and other items seized from his house. It will be recalled that earlier on August 10, Ayush Gaur, the investigation editor of Samachar Plus news channel had filed a complaint against the CEO Umesh Sharma, the then registrar of Uttarakhand Ayurveda University, Mrityunjay Mishra and three others at Rajpur police station. Gaur had averred that Sharma had directed him to conduct sting operations targetting chief minister Trivendra Singh Rawat and his close associates. Anything incriminating captured in the sting operations was to be purportedly used for blackmail. Gaur had further revealed that he  had successfully conducted sting operations on some senior officials, close relatives and acquaintances of  the CM, though nothing incriminating  had been found in them. Based on his complaint, the police lodged cases under section 386, 388 and 120 B against Sharma and four others. 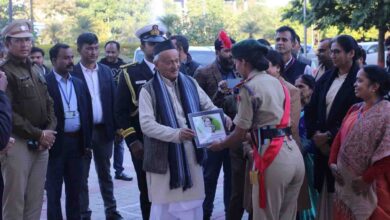