Amid a massive show of strength, the Chief Minister Pushkar Singh Dhami filed his nomination papers as the Bharatiya Janata Party candidate for the Champawat by elections on Monday. The top leadership of Uttarakhand BJP was with Dhami during the process of nomination. The CM held a massive road show in Tanakpur- Banbasa area in the morning before filing his nomination at Champawat Tehsil. In the morning the CM and his wife offered prayers at the Chakarpur Bankhandi Mahadev temple. After filing his nomination papers, Dhami addressed a well attended public meeting in Champawat.

He said that the Champawat would now act as a bridge between the plain and Pithoragarh. He said that he is a native of Pithoragarh and his family resides in Khatima. The CM said that when he was a child his mother used to say that people of Champawat are very good and the BJP leader Kailash Gehtodi has proved her observation correct.

Dhami disclosed that more than a dozen MLAs including those from the opposition had offered to vacate their seat for him but he chose Champawat because he has been attached with the place since his childhood. Terming Champawat as a land of Guru Gorakhnath, Dhami said that Uttar Pradesh CM Yogi Adityanath during his recent visit to  the state had said that he would come to Champawat to offer prayer at Gorakhnath temple. Seeking support from the people of Champawat, Dhami said that the party high command has put its stamp of approval on his name but the stamp of people of Champawat is now needed. He said that he is receiving unprecedented love and support from people of Champawat. Dhami said that the BJP government is taking many decisions for the development of the state and Uttarakhand would soon be among the top developed states of the country.

In the recent assembly elections, Dhami was defeated by Bhuwan Kapdi of Congress from Khatima assembly constituency.  Though he lost the election the ruling BJP came back to power in Uttarakhand and the central leadership of BJP appointed Dhami as CM of the state for the second consecutive time.  To fulfil the constitutional obligation of getting elected to the assembly within six months the BJP MLA from Champawat Kailash Gehtodi resigned from his assembly membership after which the by-election is being held.  To retain his position as CM of the state Dhami must win the assembly by- election, the voting for which would be held on May 31. The counting of votes would be on June 3 and the result would be declared on the same day. 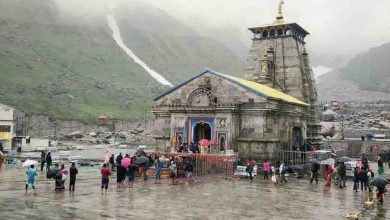